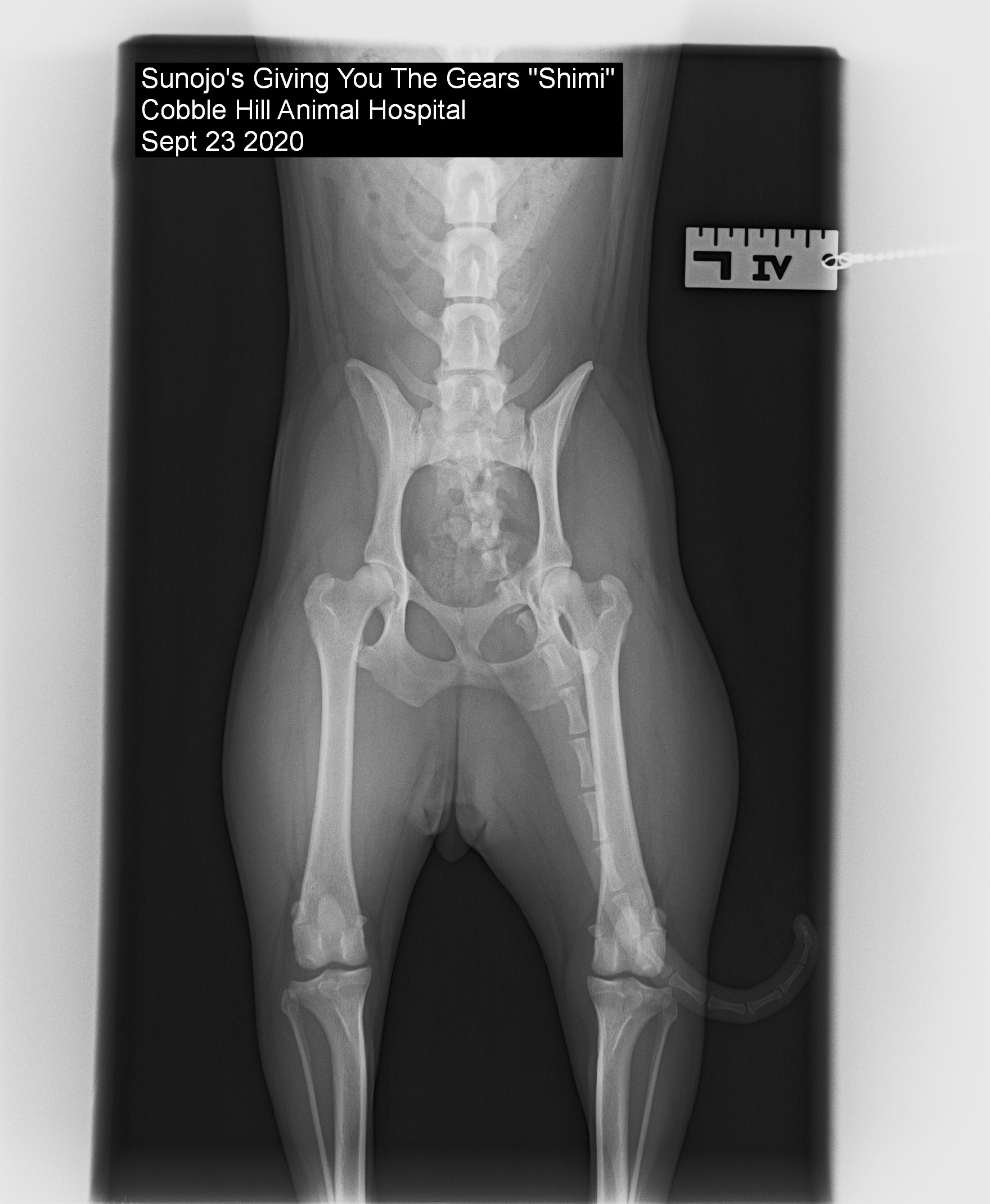 Shimi had her hips X-rayed and her patellas checked. Everything looks good from the vet’s point of view; next step is to send the forms into OFA. Next thing we need to do is to get Shimi’s eyes looked at. That’s going to be more difficult, because there are no opthamologists on the Island. There are a few of us who have dogs that need to be tested, but COVID.

A little about the Orthopedic Foundation for Animals: They provide evaluation of screenings submitted by veterinary professionals. The organization began in 1966, primarily concerned with reducing incidences of hip dysplasia in working and show dogs. Today, the OFA also evaluates other heritable conditions, such as neurological disorders, cardiac function, and eye condition.

The most powerful tool that OFA maintains is its database. Using the search function, one can search for a dog by name, a particular breed, or a specific condition. This provides the user with a genetic map that – if the participants test for the same condition – can reveal much about what the dogs in a pedigree have contributed to a particular dog.

One problem I have with the OFA database is that it only automatically records favourable results of some conditions. This may be because less people would use the service if they knew that their dogs’ results would be public and thus risk loss of standing or income or trust in the health of the line(s) they breed.

Why Would Someone Want To Hide Poor Results?

Money isn’t what I see as the primary motivation, even though it is undoubtedly a contributor to why someone wouldn’t want their dog’s poor cardiac health or lack of a functioning thyroid be publicized.

One’s ego and standing in the dog community is what I think a more powerful motivator. As someone who (in non-COVID times) attends dog shows and spends a lot more money on their dogs than normal people, believe me, I have a lot of ego invested in my dogs and it would be a serious thing if I found that a breeding dog of mine had something that it could pass on to future puppies.

Another facet of this is that the presence of a heritable condition does not necessarily mean that you should cull the dog from breeding, especially if they carry diverse genes that could also be passed on. If making the choice to breed a dog that is physically afflicted by a condition that cannot be predicted by DNA testing the parents, criticism will inevitably follow.

I still maintain that transparency is a valuable tool for breeders genuinely looking to improve or maintain the health of their breed/line.

Why would someone breed a dog with a heritable condition?

Then, as now, we still don’t have a reliable test that can predict the likelihood of a dog passing on hip dysplasia. However, we can evaluate prospective breeding prospects and then decide, based on the results, whether this dog has good structure.

Many people believe that a good evaluation means that the dog itself is a good breeding prospect. They’re not entirely wrong; good hips or normal cardiac function is a good thing.

Thing is, when you breed two dogs, you’re actually breeding their parents and grandparents. Genes can skip generations, so when you stick two dogs together, they don’t exist in a vacuum. Their offspring have 12 dogs in their immediate history that are influencing their genes.

What about, uh, incest?

If a litter is bred ‘on’ a particular dog, that dog will appear more than once in their pedigree and exert a greater influence on their genes. Yes, this is inbreeding – or line breeding, if one prefers. Done with care and watchfulness, it will double up on ‘good’ genes and result in strong, healthy dogs that carry the ‘mark’ of their breeding. Done poorly or too much and the vigour of the line weakens. There is always a risk of undesirable recessive genes popping up.

Sometimes this is useful, because it calls attention to previously-unknown recessive genes. In general, though, it is not a desirable outcome to produce dogs with problems that threaten their quality of life.

Here, though, we have a quandary. Do we eliminate this dog and their genes from the breeding pool or do we breed with caution and observe the offspring carefully? As we learn more about genetics, it becomes apparent that, until we can successfully scan and manipulate DNA itself, there are no easy answers.

And if even one person posts ‘Adopt Don’t Shop’, I’m burning Tierce’s toys.

Learn more about the CHIC Program.