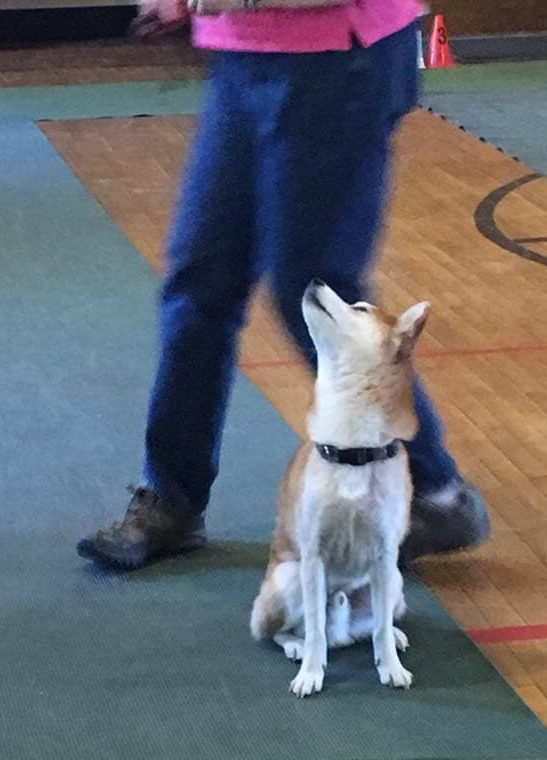 “Stubborn Shiba.” It’s a big internet meme that has filtered into the dog world and causes some toxic results. Originally it was meant as a joke, from Western owners who try to train their Shibas as if they are Lassie or Rin Tin Tin, and are surprised to find that their adorable teddy bear has a mind of their own.

Words are powerful. Sometimes an “in-joke” that is made into a meme can give a negative message. The gross oversimplification is funny to us, but becomes “information” to the uninitiated. I completely appreciate the “irony.” It represents a western person’s frustration with the Shiba’s temperament that is the opposite of our western idea of a dog’s. But the term gives people the wrong information about this very intelligent breed, and in some cases can lead to abuse.

The Shiba is from another culture, whose body language and temperament differs greatly from Western manners. “Stubborn” is an English word which implies willful disobedience, which is not a characteristic of the Japanese breed. The complex temperament of the Shiba is specifically fostered to be proud, independent and sensitive. Western dogs, in contrast, are bred to be dependent, submissive, and to take strong corrections in training. This is what we think of as a “dog” in the West. So calling a Shiba stubborn is a misrepresentation that can lead to tragedy.

Their complex nature, that we love so much when we first meet a Shiba, is a combination of three characteristics the Japanese have named. “Kan i,” “Ryosei,” and “Soboku.” These are actually a crucial part of the Japanese standard for judging the breed. Judges look at the dog as more than a set of physical characteristics. They look to see this specific balance of temperament.

The first, “kan i,” is the Japanese word for “braveness and boldness combined with mental strength.” To reduce this to our word, “stubbornness,” is a bad mistranslation. It can be used as an excuse for humans to overlook the mixed, unconscious messages they are sending a dog. They blame their failure to communicate on the dog, assigning a characteristic to the breed that does not exist.

It is nice that we accept the Shiba as different, but that is only a beginning. Allowing your dog to be “stubborn” is actually allowing yourself to be lazy in your own efforts to communicate. Shibas are like other dogs in that they need to know their job in the family, they need to know the humans are protecting them, and taking care of things. They need the human to gently and consistently lead, or they will take over to fill the gap. They are small, and quite charming, so this seems initially ok, but it actually causes the dog stress, which can become the root of so many behavior issues.

The Shiba has only begun to become popular, and the messages we give now will affect the entire future of the breed. Without a feeling of safety, the Shiba cannot fully develop “ryosei,” the “good nature with a gentle disposition,” that is also required by the Japanese.

The main reason that “stubborn,” is such a damaging word to apply to Shibas is because it overlooks the third temperament characteristic, “soboku,” which means “an artless and open spirit.” Stubbornness is defiance, and soboku is innocence. Labeling this vulnerable aspect of a Shiba dog as willfulness could cause a frustrated person to push the dog and thus damage their innocent nature.

If you think I am exaggerating the importance of this, just take a look at the Shiba rescue pages. Shibas are being dumped and labeled as “not nice dog,” “vicious,” “untrainable,” and worse every day, because of this misunderstanding of the breed. Having a Shiba is like having a small wolf in your home, but that doesn’t mean the puppy doesn’t want to fit in and guided. It means we need to learn their language, be mindful of the messages we are giving, and take responsibility for the results.

Malley Bragg Heinlein is the creator and driving force behind Shiba CAN, Too!, a Facebook group dedicating to training Shiba and other Nihon Ken using positive reinforcement techniques. They can also be found on Instagram as @malloise. All photos on this post courtesy Malley Bragg Heinlein. Feature (top) photo credit to Susan Kamen Marsicano.