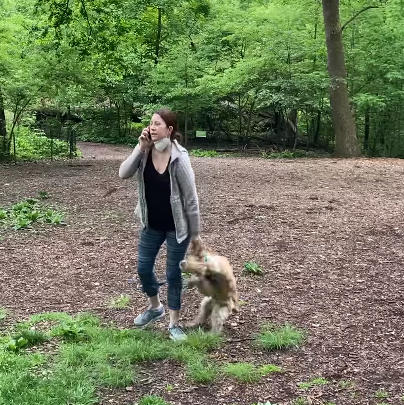 Christian Cooper, a senior biomedical editor at Health Science Communications and – joy to the hearts of nerds everywhere – a former writer for Marvel Comics, was birdwatching at “The Ramble”, a section of Central Park, on Memorial Day. The Ramble is clearly posted as an on-leash zone.

When Cooper saw an off-leash American Cocker Spaniel running through the brush and disturbing the birds he was hoping to spot, he asked the owner to put her dog on a leash. She refused. Then things got unhappy.

(fun fact: throwing treats is one strategy to stop a charging dog in its tracks so you can get yourself and your dog out of the situation)

A Word on Racism

Of course, I have never experienced the above. Oh, I’ve been sworn at, spit at, and physically threatened by people who I politely asked to put their dog on a leash and that the area they were in was an on-leash area.

I’m Weird-Al-sour-cream white and nerdy, so I’ve never had anyone threaten to call the cops and tell them a white woman was physically threatening them. I’ve also never lived in an atmosphere where I felt that the police would not only assume I was the guilty party; they were a risk to my life and safety.

For someone to respond so malevolently to a simple request to put her dog on a leash is a sign that we need to start leashing this attitude. Maybe add a shock collar.

Every time I see Amy Cooper sling her American Cocker Spaniel around like a jug of wine she’s too drunk to find the mouth of, my palm itches a little. The bitchslap, however, has already been administered. She’s lost her job, she’s lost her name, she’s lost her dog. For once, the kind of behaviour that she engaged in actually had consequences for the dog owner.

In communities all over the world, careless and entitled dog ownership causes tragedy every year, yet the law has yet to catch up on what has never been a dog problem.

It’s time to adjust the way society treats people who choose to put others at risk via their dogs. It’s time to stop giving people a pass for ‘not knowing’ their dog is a potential danger or stressor.

How The Hell Do We Do This?

So glad you asked. I have a number of ideas.

Do you have ideas? Let me know in the comments.